While these books feature London balls and tea parties aplenty, they also deliver an enticing taste of travel, love, and adventure beyond England’s shores!

This SPICY full-length Victorian romantic adventure is full of wit, adventure, and plenty of passion!

Miss Lily Strathmore has made a desperate bargain. One last adventure abroad with her botanist uncle and his family, and then she will do as her parents bid and wed the proper (and boring) viscount her mother has selected as Lily’s ideal husband.

James Huntington is on a mission. Retrieve his grandfather’s lost journals from the wilds of Tunisia, and win the estate and fortune he so desperately needs. This quest will be the making of him–or his ruin.

Thrown together on a botanical expedition, James and Lily’s attraction is immediate, and impossible. Despite every reason to keep their distance, the two find themselves inexorably drawn together as they race to reach a hidden valley before their enemies can bring all their dreams crashing down.

Note: This title was formerly published as PASSIONATE by Kensington books. It has been revised by the author and republished under the original title of Fortune’s Flower.

“The talented Ms. Lawson is being added to my to-be-read pile and is a definite must read!!” – 5 star review from Dee Foster

Lady Sara Ashford has spent years cultivating her spotless reputation: a difficult task in the face of her mother’s scandalous exploits abroad. Now she is set on a path toward a perfect, respectable future—until the highly unsuitable Comte du Lac comes to London, and she is given the task of instructing him on how to behave properly in English Society.

At first Lady Sara finds the gentleman quite intolerable, but after he steals a kiss she realizes he is a terrible danger to her future. As soon as possible, she must put him out of her life—and her heart—forever.

This shorter, sweet tale of around 75 pages takes place during the end of Fortune’s Flower. Can be read stand-alone, without spoilers. Contains kisses only~

This second full-length novel in the series is also highly sensual, and features “Danger, desire, and a deliciously different Victorian setting.” – Booklist

Injured while on the Isle of Crete, Miss Caroline Huntington is taken to the island’s darkly enigmatic British doctor, Alex Trentham. At first put off by his gruff manner, she soon realizes there is far more to this handsome, wounded man than meets the eye.

Dr. Alex Trentham fled England, vowing not to return, but he never bargained for the beautiful and vivacious Caroline to enter his life. As she recovers, the carefully constructed walls around his heart start to crumble under the force of emotions he cannot allow himself to feel.

When danger threatens, Caroline must return to England, leaving Alex behind. But the distance cannot withstand the force of their longing, and Alex is drawn back to the woman he loves—and the tragedy in his past that could cost him everything.

Note: This title was formerly published as ALL HE DESIRES by Kensington books. It has been revised by the author and republished as To Heal A Heart. 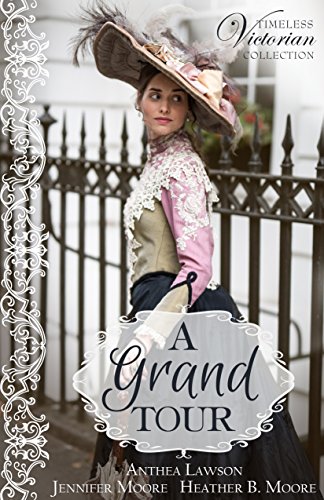 After her first romance ends in disaster, Miss Isabelle Strathmore vows never to fall in love again. She will travel, certainly, and see the world, but it will be a spinster’s life for her. She has learned the most painful lesson of all—that her heart simply cannot be trusted.

Gavin Reed, the Earl of Jasper, is unexpectedly charmed by Isabelle. Past encounters have made him wary of taking a chance on love, but by the end of the Grand Tour, he is determined to make Miss Strathmore his wife. But fate has more in store than either of them guesses. Beneath the Mediterranean sun, can Isabelle and Lord Jasper find their happily ever after before disaster strikes?

~ Music of the Heart series ~

SONATA FOR A SCOUNDREL – Book 1

Clara Becker is a supremely gifted composer–a talent of little to use to a woman in 1830s England. Her compositions only have worth when they are published under her brother’s name, yet this deception barely enables them to scrape out a living in the poorest quarter of London.
Darien Reynard, the most celebrated musician in Europe, pursues success with a single-minded intensity. When he comes across Becker’s compositions, he knows that this music will secure his place in history. Darien tracks the composer down and, with some difficulty, convinces the man to tour with him. Mr. Becker agrees, but with the most unusual condition that he bring along his sister…
Darien’s unexpected desire for Clara jeopardizes the entire tour, but Clara must protect more than her heart. If he discovers her secret, her family’s new found fortune – and their very reputation – will be destroyed.

She is filled with wild passion… Jessamyn Lovell, the “Gypsy Violinist,” is the newest musical sensation among the ton, but she and her sister are caught in the grip of an unscrupulous uncle, who uses her performances as a cover for his crimes.

He has scoured the recklessness from his soul… The Earl of Silverton, Morgan Trevethwick, has spent ten years restoring his family’s reputation in the wake of scandal—and it has made him a tightly controlled and unyielding man.

Together, they will be one another’s ruin… When danger looms, Jessa risks everything to seek Morgan’s help. He cannot refuse a woman in distress, though she threatens to overturn the future he has worked so hard to secure. Even worse, she relights a fire in his heart—one he had thought extinguished forever…

Four heartwarming tales of the holiday season filled with sweet kisses, misunderstandings, Christmas trees, and best of all, true love.

A Countess for Christmas – Miss Cecilia Fairfax dreads the upcoming holidays, especially when her brother brings home an unexpected guest. But of all the blessings of the season, sometimes the most unexpected is love.

A Duke for Midwinter* – After a gentleman rescues her from a winter storm, Miss Selene Banning finds herself snowbound with Sir Jared Kendrick, who is not precisely who he claims to be…

A Prince for Yuletide** – Miss Eliana Banning attends the Midwinter Masque and meets a gentleman in wolf’s clothing who might prove to be her heart’s desire… or her worst enemy.

A Nobleman’s Noel – Lady Peony Talbot never meant to be tangled in a false betrothal to her best friend’s brother. After the holidays, she promises to break their engagement, but William Banning will never know that it will break her heart into the bargain.

Enter an era of dashing dukes in disguise, secret-keeping viscounts, and earls trying (and failing) to resist temptation! This sampler collection of novels and novellas from RITA-nominated, USA Todaybestselling author Anthea Lawson is full of spicy (and a few sweet) delights.

FORTUNE’S FLOWER – To claim his family estate, James Huntington embarks on an expedition to find his grandfather’s missing journals. He’s at odds with his fellow traveler, the wellborn Miss Lily Strathmore – but even as they succumb to temptation, danger awaits.

THE VISCOUNT’S SECRET – Anthony Blake, Lord Percival, is renowned throughout the ton for his handsome face and foppish ways. Only a select few know that beneath his foolish exterior is a keen intelligence in service to the Queen. Nobody suspects his secret until he meets a quiet young woman who sees far more than she should.

THE PIANO TUTOR – Widowed Lady Diana Waverly finds love and passion in the most unlikely of places when a new piano tutor arrives at her door.

MISTRESS OF MELODY – With her future in jeopardy, a young woman must turn to Morgan Trevethwick, the Earl of Silverton, for help. He cannot refuse a lady in distress, though she threatens to overturn his entire carefully-planned future.

A DUKE FOR MIDWINTER – After a gentleman rescues her from a winter storm, Miss Selene Banning finds herself snowbound with Sir Jared Kendrick, a baronet who is not precisely who he claims to be.

MUSIC OF THE HEART

TO WED THE EARL

A COUNTESS FOR CHRISTMAS

A DUKE FOR MIDWINTER

A PRINCE FOR YULETIDE

A NOBLEMAN’S NOEL (Only available in the Noble Holidays collection)

THE VISCOUNT’S SECRET (Only available in the Shadows & Spies collection)

WALTZED (Only available in The Queen’s Ball anthology)